My Review Of “The Apostate: Call Of The Revenant” 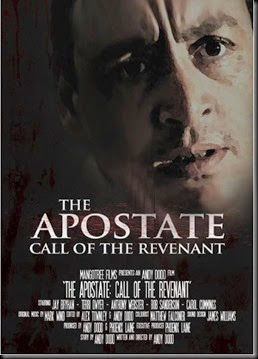 Andy Dodd’s thriller “The Apostate: Call Of The Revenant” is a visceral, dramatic tale based on true events. The film stars Faith Bryhan, James Bryhan, Ella Childs, Carol Cummings, Andy Dodd, Terri Dwyer and Luke Odenwalder. “The Apostate” tells the story of Lance Cooper, grieving father and ravenous killer. Andy Dodd offers up an intense representation of the events surrounding the murder of 5 souls after the death of a father’s child.

The story is a strong, emotional one filled with plenty of melodrama, suspense, and stark realism. “The Apostate: Call Of The Revenant” is a slow burning, fluid piece that tales Cooper’s story in a serious of gritty, horrific flashbacks shrouded in mystery, all of which are framed around an interrogation upon Cooper being brought back to police headquarters.  The cast give powerful, invoking performances that pull you into the film. There is a witty approach that attempts to mask the truth, giving view to both the reality of the evidence, and the reality of Lance Cooper’s belief of events leading up to the truth.

The special effects used in “The Apostate” are practical, raw effects that give plenty of blood and gore. The flashback scenes offer up a bit of “Saw” styled grue that for the most part work perfectly. The atmosphere surrounding these affectual moments is one of true horror. They are on the cheaper side of indie budgeted effects, but due to careful choices by Dodd, and his team, all uses are believable. The soundtrack and music score are stripped down, expected instrumental tones and melodies that push the macabre of the story to chilling levels.

Overall “The Apostate: Call Of The Revenant” gives us a strong, indie true life crime in gory, dramatic honesty. Andy Dodd’s directing shines as does the talents of the cast and crew bringing this nightmare to life. The story is captivating and the special effects are choice. There are moments when the effects-when shown straight on-look cheap. Very few moments but I would be remiss not to point them out. The beginning does move slowly so fans of high energy horror will be bored. The big reveal that gives us truth doesn’t stay elusive beyond the 40 minute mark, and even before that there are hints to the truth visible. That of course is to all who are not familiar with the crimes in this film. “The Apostate: Call Of The Revenant” is, however, a worthy film that warrants watching.
Posted by A Southern Horror Fan