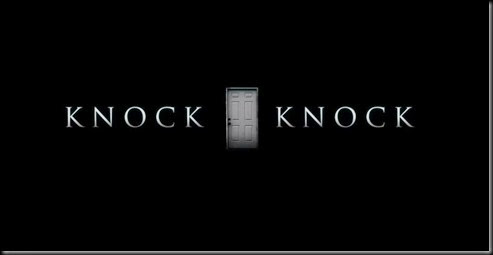 The first teaser trailer has been released for “Knock Knock”. The film is directed by Eli Roth and starring Lorenza Izzo, Ana de Armas, Ignacia Allamand,  Colleen Camp. The film has a lot of buzz surrounding it and even made EW’s must list last week.

Evan Webber (Keanu Reeves) is living the dream. Just look at his beautiful, successful wife, his two wonderful kids, and his truly stunning house—which he designed himself. Of course he did. Things are going so well, Evan doesn’t even mind spending Father’s Day alone while the rest of his family heads out for a beach weekend. And then there’s a knock on the door.

The two young women (Lorenza Izzo and Ana de Armas) standing on Evan’s doorstep are where Evan’s dream takes a nightmarish turn. Given co-writer/director Eli Roth’s well-deserved reputation for creating cinematic discomfort, it should come as no surprise what happens next: Things get weird, and then dark, and then much, much, much darker. But this is no splatter film, so Roth keeps the horror nice and psychological as Evan’s life—and house—get ripped apart, piece by beautiful piece.