My Review Of “Treehouse” 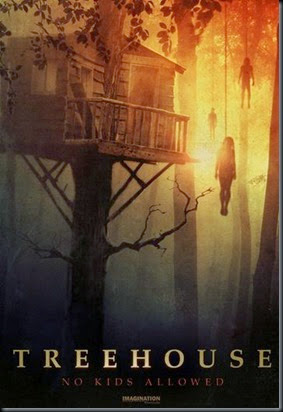 Bartlett’s story is well written, with great cinematography, and breadth of character control as the very dark tale builds to a disturbing and visceral end- until the actual ending. First though “Treehouse” is a solid film where the drama and character development are concerned. The cast give mature, well acted scenes of heavy substance, and depth. The horror aspects are mostly off camera with very little moments of chilling terror taking place through the first 75 minutes of the film which is a bit of a let down. However the film does have some intense, chilling action that climaxes this nightmare scenario, lasting right up until the abrupt and irritating end. Yeah I know- total spoiler moment.

The special effects, settings and sounds in “Treehouse” all work for the horror elements in the film. Everything that happens gives more of an adult horror vibe, instead of the teen driven story that is actually presented. Think “Under The Bed” in heavy seriousness but without the actual horror for most of the film. I know I keep bringing that issue up but it is a big irritant for me, personally. Still the film has been getting some great reviews mixed in with some disappointing ones. The effects are great when displayed, real quality work. The last act is terrifying when the true horror of the situation is revealed. Disturbing to say the least. The soundtrack does an ample job to really drive home the heavy atmosphere and emotional desperation of the characters story.

Overall, “Treehouse” gives good story, but mostly on the side of – say if- Lifetime has an R- rated channel where the films had darker material and stronger gory violence. When the horror is there it brings it! Unfortunately the first 75 minutes is mostly drama with suspense and no release for die-hard horror fans. It is a noticeable loss even with a story this well written and delivered. Plus that “WTF” ending is just so rude and disappointing that you sort of fill pissed. But I guess just as in real life, not all stories end neatly wrapped-up. I don’t know. See the film, because the story is a really good one that needs to be watched, just don’t think you are gonna get a lot of horror in “Treehouse” and you won’t be too disappointed.
Posted by A Southern Horror Fan