Check out the official poster for mash-up, action horror “Army Of Frankensteins”. The film is directed by Ryan Bellgardt and stars John Ferguson, Jordan Farris, Christian Bellgardt, Lucas Ross, Rett Terrell, Raychelle McDonald. No word on when the film will be released. 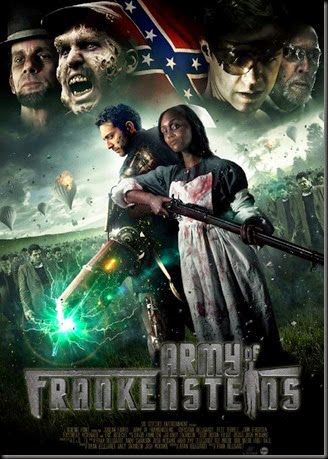 After a failed attempt to propose to his girfriend, Alan Jones is beaten to within an inch of his life by a street gang and taken to a mysterious lab where Dr. Tanner Finski and his kid genius assistant perform horrible experiments on him hoping to re-animate a Frankenstein. The experiments lead to a hole being ripped in space and time, manifesting an Army of Frankensteins from hundreds of parallel universes and sending them all back to the 19th century, directly into the heart of a bloody battle between the North and South.
Posted by A Southern Horror Fan