My Review Of “Hell Fire” 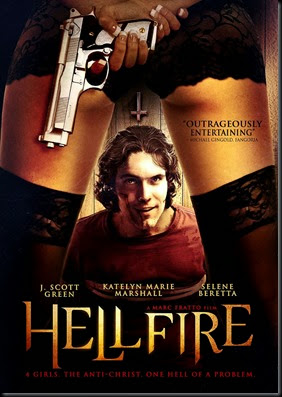 Marc Fratto’s “Hell Fire” is a action horror filled with quick witted dialog, and edgy hyperbole. The film stars J. Scott Green, Katelyn Marie Marshall, Selene Beretta, Jennice Carter. Kasey Williams, and Shashone Lambert. The plot centers on four prostitutes who kidnap the Anti-Christ and hide out at a cabin in the woods in hopes of a big pay day. “Hell Fire” is a fast paced, thrill ride of psychotica and damnation.

The story is a strong, well written onslaught of witty humor spat out by comparable indie actors. The characters are, individually,  creative personas that come together in perfect insanity. The cast and director of “Hell Fire” were definitely in sync and really feeling this story because everything came together to create a wild, entertaining moment of escapism. Fratto’s creativity and ability to tell a story is stellar, as exciting as John Waters with Trash Cinema, and intense as Tarantino with his postmodern crime-thrillers.

The special effects are pretty tight in “Hell Fire” with some very gritty, realistic horror elements that will please any horror/gore fan. I was impressed, mostly because it is obvious that this is a low budget film so I was shocked at the higher quality practical effects used here. The over all effect of the scenes often felt too real. Kudos. There are a few moments when CGI is chosen, but never enough to kill the mood or sap the Hellishly fun energy out of the film.

The only suck of “Hell Fire” is the very noticeable moments of poor sound quality during dialog scenes. Not always but it does keep the film from reaching 100% of its "awesomeness" potential. Now the soundtrack and music were both doing their thing to really create the right atmosphere Fratto was going for. The music pulled from classic, b-movie nostalgia and contemporary mood enhancement. Yeah, other than the wonky sound quality in several of the dialog scenes, things are on point in “Hell Fire” – in my opinion.

Overall “Hell Fire” is a killer action-packed, bloodbath of supernatural insanity, with an atmosphere of gutter trash avant garde. I loved this movie and Marc Fratto knows how to tell a great, original story. The characters are affective and at times likeable. Even as bad, and unsavory as they are portrayed, I couldn’t help but connect with them. These are not people engaging or talking table talk by any means, this back alley, trashy, real stuff that goes down after dark in red light districts. Which makes the fact that this is a supernatural battle between good and evil fought by hookers, pimps, druggies and the Anti-Christ that much more special. “Hell Fire” is definitely worth the watch. Any fan of horror, gore or exploitation.will really enjoy this film.
Posted by A Southern Horror Fan