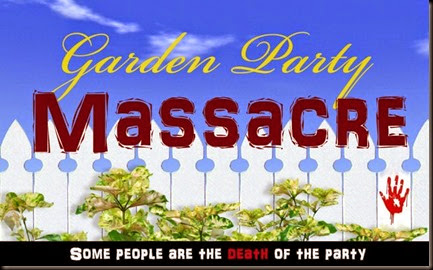 Gregory Blair is not a man to rest. With his psychological thriller DEADLY REVISIONS signed by SGL Entertainment for North American distribution, Blair is ready to get started on his next project.   This time, he’s adding comedy into the mix with a story about a gathering that goes awry when an unexpected guest arrives.  With a pickax.  And an attitude.

“I wanted to do something totally different from DEADLY REVISIONS”, Blair said.  “That film is a brooding, moody, slow-burn mystery and I wanted to do something kinetic, wild and crazy.  I had this idea and it made me laugh, so I started writing it out.  I had a reading with some actor and writer friends when it was about half done and they all loved it.  So I finished it and I’m ready to bring it to life.  I even want to be in it!”

GARDEN PARTY MASSACRE is a fast-paced, hilarious romp in the vein of Shaun of the Dead andTucker and Dale vs. Evil.  A longtime fan of horror comedy, Blair was eager to make his own contribution.  “I think horror easily lends itself to comedy because the emotions are so high and the situations are often outrageous.  I love films that successfully walk that line between horror and comedy, whether it’s witty and referential like the Scream or giddy low camp like Evil Dead 2 and Army of Darkness.”

ARDEN PARTY MASSACRE is set to begin preproduction early next year through Blair’s production company, PIX/SEE Productions.  Having snagged the L.A. Movie Award for “Best Narrative Feature” as well as the Claw Award for “Best Feature Film Screenplay” (both for DEADLY REVISIONS), Blair has proven himself a writer who knows how to tell a good tale.  And GARDEN PARTY MASSACRE looks to be another winner.
Posted by A Southern Horror Fan