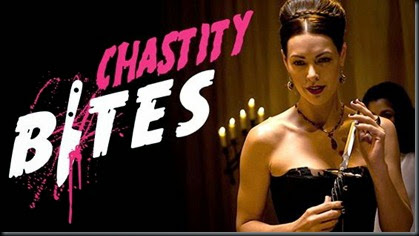 Just in time for our favorite holiday, CHASTITY BITES is now available for subscribers of Hulu Plus, and back in rotation on Showtime Networks & The Movie Channel! (And as before, available for rental or purchase via iTunes, Amazon, Vudu, YouTube, and select cable carriers on-demand.)
If you're overseas, stay tuned... We'll be announcing details soon for our UK release in February 2015, and in Germany, Netherlands and more soon after!

In the early 1600's, Countess Elizabeth Bathory slaughtered more than 600 young women, believing if she bathed in the blood of virgins that she would stay young and beautiful forever. Still alive today, she's found a perfect hunting ground for her 'botox' as an abstinence educator in conservative America, and the young ladies of San Griento High are poised to be her next victims. But will her unholy ritual finally be stopped by Leah Ratliff, a feminist blogger and ambitious reporter for the school paper?

“Chastity Bites is Knowles’ directorial debut and my only thought is “why in the hell did it take this long?!”. The style, feel, and look of the film is that of a seasoned director whose work is effortlessly executed.” –A Southern Life In Scandalous Times ( Full article.)