The new season of ‘Hemlock Grove’ lands July 11th, continuing the twisted story of some truly warped characters. Now the announcement has come out that the first season, of the acclaimed werewolf series from Eli Roth, will land on DVD/Blu-ray October 11th thanks to Scream Factory. SF has been popping out some hot properties over the years from cult to contemporary. 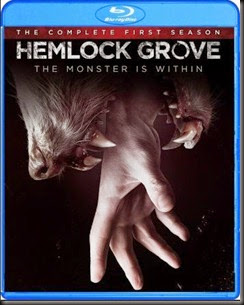 13 episodes on 3 discs on Blu-ray and 4 discs on DVD; All-new bonus features including 6 vignette.

In a small Pennsylvania town, something evil has come in search of prey. But who is the true monster in Hemlock Grove? The brutal slaying of a teenage girl sends the townspeople of Hemlock Grove into a desperate search to find her killer. But this sleepy community soon finds itself living a nightmare as secrets and rumors threaten to drive them all down a dark path as they struggle to uncover the truth. As they hunt for a monster among them, rumors mount and many of the eccentric residents become suspects, from the newly-arrived Gypsy family to the wealthy Godfrey clan. In the twisted world of Hemlock Grove, everyone hides a dark secret.
Posted by A Southern Horror Fan