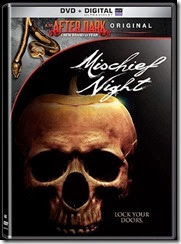 Lionsgate Home Entertainment released a new trailer for the upcoming After Dark Originals 2 horror “Mischief Night”. The film is directed by Travis Baker and stars Brooke Anne Smith, Marc Valera, Nikki Limo, Matt Angel, Malcolm McDowell and Erik Palladino. “Mischief Night” is due out May 20th on DVD and VOD. This is the seventh film in the After Dark Originals 2 series.

On the night before Halloween, young Kaylie is at work babysitting when she’s warned by a local night watchman not to answer the door because nothing good can happen on Mischief Night. Soon Kaylie realizes someone is stalking her, but on the night before Halloween, nothing is as it seems. They say, “Danger is on the other side of the door.” But they never said which side of the door you’re on.

)
Posted by A Southern Horror Fan