Check Out Two Posters Plus Official Trailer For “Collar”

“Collar” is an upcoming extreme horror film from director Ryan Nicholson starring Nick Principe, Aidan Dee, Ronald Thompson, Mackenzie Murdock,  Mihola Terzic. “Collar” has released two posters promoting the horror that threatens to fuck you up like a bad accident while conjuring a nightmare which brings a rookie cop into the twisted will of a hungry Satanic derelict. Also an official trailer has been released that should fuel your appetite.

A rookie cop starts her shift like any other but soon it will all change for the worse . While attending a routine complaint, a derelict with a reputation of satanic violence, attacks the officer and "collars" her with a dog leash, holding her captive in his bum shack. As the night unfolds, more hapless victims enter his alleyway as he maims and mutilates with a cannibalistic urge. Onlookers do nothing to help and film the atrocities with their cell phones. It's a spectacle of the macabre. 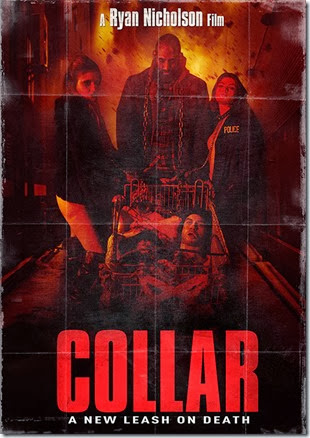 )
Posted by A Southern Horror Fan