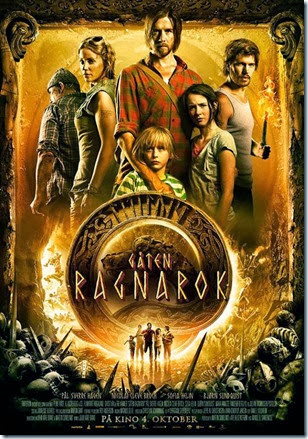 Playing upon the old world myths that give rise to tales of dragons and even our modern day lore about such creatures as Loch Ness and Champ, (a personal assessment not associated with any description from the film), is an adventure/ creature feature called “Gaten Ragnarok”. The Norwegian film is directed by Mikkel Sandemose and follows a family of archeologists/explorers as they seek to uncover the truth behind the legendary Oseberg Viking ship. The only inscription found on the ship is the enigmatic 'man knows little' written in runes. Sigurd is sure that the Oseberg ship contains the answer to the mystery of Ragnarok, the end of days in Norse mythology.

When his friend Allan finds similar runes on a stone from the north of Norway, Sigurd becomes convinced that the runes are in fact a treasure map. Together they mount an expedition group and their adventure leads to "No man's Land" between Norway and Russia, which has been deserted for decades. Here Sigurd learns the true meaning of the runes - a secret more terrifying than he could possibly imagine.