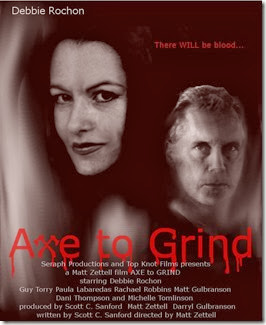 “Axe To Grind” follows B-movie legend Debbie Wilkins, who goes on a killing rampage after her former lover, Peter Burgess, leaves her out of his new film and replaces her with a 23 yr old scream queen. Debbie doesn't take rejection well so other members of the cast and crew end up paying the price in blood.