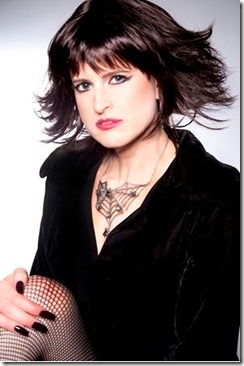 The Multi-Talented Performer's Fiery Take On The Bad Company Classic Is In the Top 50 on The Mediabase Activator Chart, Keeping Close Company with Rihanna, David Guetta, American Idol Phillip Phillips and
The Goo Goo Dolls

LOS ANGELES - Spooky-wicked Southern California-based horror rocker Characula (www.characula.com) continues her trailblazing, dimension busting ways, scoring her first ever Hollywood Music in Media Awards (HMMA) nomination.
The multi-talented singer, songwriter and performer's latest single, a blistering cover of Bad Company's "Ready For Love,” received a nod in the Adult Contemporary/AAA category, whose winner will be revealed at the upcoming 2013 event, set for Thursday, November 21 at the Fonda Theatre in Hollywood.

"Ready For Love” remains in the Top 50 on the Mediabase Activator chart, just below the latest hits by such superstars as Rihanna, Macklemore & Ryan Lewis, American Idol Phillip Phillips, J. Cole and David Guetta, and ahead of the Goo Goo Dolls and DJ Suss One.
Beyond a creepy-fun alter ego for multi-talented singer, songwriter and performer Cheri Anaclerio, Characula is her turned inside out as she unleashes the demons in her powerhouse imagination to create, in a tip of the blood-dripped cap to Frank Zappa, blistering music about monsters, sex and rock 'n roll.

An engineer by trade, Characula may not be able to hide her wild inner truth from anyone much longer, considering the momentum that's been building since fall 2012. Before Halloween and for a few weeks after, her infectiously ghoulish single "Mummy Dance” snagged airplay on numerous Top 40 stations across the country. Her singles are being promoted by Howie Rosen of Howard Rosen Promotion, Inc. (www.howiewood.com)

In her video for "Ready For Love,” she sports two different looks, one with a red "electro-shocked” wig, the other with black hair and wearing a nightgown from the 1940s. She is also shooting videos for "Come On Baby” (a searing blend of seduction and evil) and "Mummy Dance.”