Check Out The Trailer For “Hell Baby” 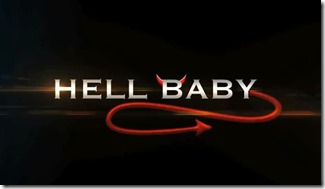 The first trailer for “Hell Baby” has been released. The horror comedy follows a couple starting out in a starter home as first time parents-to-be. With familiar faces from ‘Reno 911’ and today’s top comedians the film should be actually funny. Not gonna hold my breath on that but hey I have found most of Garant’s stuff funny –on screen and as a writer. As for Lennon, I have yet to find anything he has done not funny! The cast includes both Garant and Lennon, along with Rob Corddry, Leslie Bibb, Keegan Michael Key, Riki Lindhome, Paul Scheer, Rob Huebel.

Jack (Rob Corddry) and Vanessa (Leslie Bibb) are an expectant couple that moves into the most haunted fixer-upper in New Orleans -- a house with a deadly demonic curse. Things soon spiral out of control for Jack and Vanessa, as well as their-not-so-helpful neighbor F'Resnel (Keegan-Michael Key), Vanessa's friendly psychiatrist (Michael Ian Black), Vanessa's Wiccan sister Marjorie (Riki Lindhome) and the detectives assigned to look into the rising body count (Rob Huebel and Paul Scheer). Only the Vatican's elite exorcism team (Garant and Lennon) san save them -- or can they?