Check Out Horror Comedy The Devil Went Down To Islington 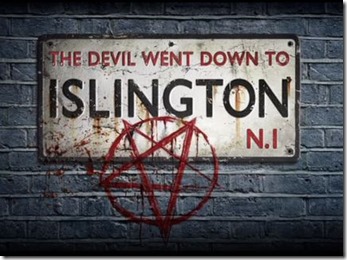 The Devil Went Down To Islington is a horror comedy about a couple of Brits who are tricked into selling their souls to the Devil. John Robertson (Spencer Brown), a down-on-his-luck music teacher and his pain-in-the-arse colleague Nick (James Lance), unknowingly sell their souls to Satan in exchange for one great weekend. At first love and fortune come their way, but when John and Nick finally twig that all is not right, Satan-bashing Father Crowley (Michael Smiley) reveals that they only have 11 hours to save themselves or be dragged to Hell for all eternity.

The film has already been shot and now seeks funds for post-production “finish up” over at Kickstarter. There is already a pretty cool little teaser trailer for the flick which gives an idea of the director’s vision. It stars Spencer Brown, Sophie Colquhoun, Michael Smiley, James Lance, Mark Benton, Olivia Grant, Ronni Ancona, Dominic Coleman and Ainsley Harriott. I personally love how they label it as a Satanic comedy. Check out the teaser and head over to the links to show some love and money.