Check Out The Trailer For “Ghost Sweepers” 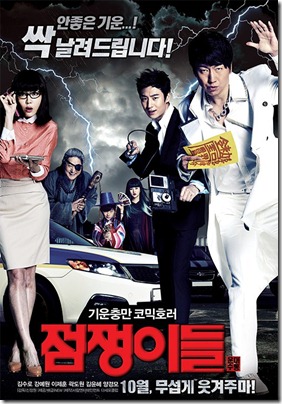 'Ghost Sweepers' co-stars Kim Soo-Ro, Lee Je-Hoon, Woori, Yang Kyeong-Mo, and Kwak Byeong-Gyoo. The film opens across South Korea on the 3rd October, 2012. The horror comedy follows Chan-young, a young journalist, sent to cover a story when all the top shamans from nationwide gather up for a grand exorcism at a small village notorious for dark rumors about an evil spirit. They barely manage to even enter the village for this evil spirit is unlike anything anyone has seen so far. The group of shamans begins their grand ritual, but with the strange eerie force that dominates the entire village and repeated attacks by the spirit, most of the shamans run for their lives. Only five best shamans remain along with Chan-young. So the six begin to explore the dark secrets of the village while preparing for the biggest battle against the evil forces.