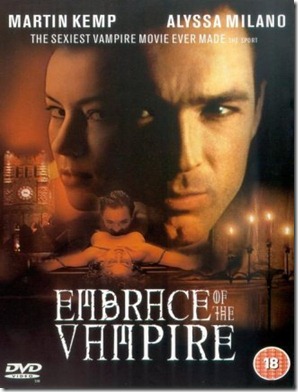 “Embrace Of The Vampire” is a 1994 cult classic that starred Alyssa Milano and was the first attempt to break from her bubble gum status that endured from all those seasons on “Who’s The Boss”. A stigma she never really broke from until “Charmed”.  Yeah there were a few sultry roles that showed her woman-ness before that but “Charmed” made it stick in peoples heads that she was fully grown. Anyway back to “Embrace Of The Vampire”. The remake will star Sharon Hinnendael. The film is already in production in Vancouver. Alan Mruvka's Filmology Labs Entertainment is teaming with Grobman-Campbell Films to produce and Cinetel Films along with Anchor Bay Entertainment, which is a division of Starz Media financing the project. Like a supernatural "Fifty Shades of Grey," story follows a virginal college student who is introduced to a dark world of carnal desires after being seduced by a handsome vampire.