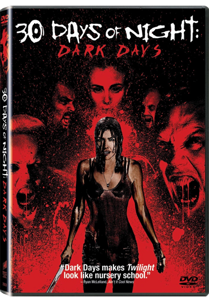 OK so I finally got around to watching "30 Days of Night: Dark Days" and at the start I felt I was gonna have a hard time watching this movie and being totally hooked in. I liked the plot line of having a Barrow survivor as the heroine. 'Stella' played by Kiele Sanchez was a strong character from the start so I felt it is gonna work. Then the story took this whole "we are the warriors" turn with a group of misfit hunters entering the scene and I thought "oh no" they are gonna take every cliche step through this blood gushing battlefield plot-line. Blood gushing is what kept me in on this aspect, the effects and the gore were as good as any bigger budget movie, this was its saving grace.

The script could have been tighter on this one, especially with the character of "Amber" played by Diora Baird. She started out all bad ass and big talk but her actions were anything but right up until the end, then she finally stepped up, but half ass and not enough to warrant writing her character as some Zena of L.A. Still in every scene that mattered the blood saves the scene. The story was kinda weak and played out for the middle part of this movie.

The last section of this movie was the salvation. It was here that we bring it back around to why Barrow? Here the blood and gore were plenty and necessary, to make this movie worth it. I am not gonna give details on the ending just in case some one out there has not yet seen it. I will say that this ending was what made me forget that the whole time I was watching this I kept thinking " I hope this movie doesn't suck". Had this movie ended any different I would say "yeah it did, but I can say it is worth seeing for Vampire fans who like their demons vicious and unforgiving. I am one of those people. However it is a weak film next to the original and barely makes it above the webisodes "30 Days of Night: Dust to Dust". If I rated things on scales (which I don't) out of 5 I would give it 3, being generous on that simple because of the blood and gore, and the full circle back to the beginning. That may kinda be a spoiler there not sure. Oh well.

So there you have my rambling thoughts on this movie. See it if you wanna see but don't feel bad if you never get around to it. Just a horror fan not in anyway some kinda real critic.