Blu-ray Release Details Announced For "We Summon The Darkness" 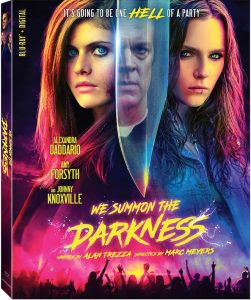 On the way to a heavy metal concert, Alexis and two girlfriends hear a news report of a local murder believed to be tied to a series of satanic killings. After the show, the girls invite three guys to join them at the estate owned by Alexis’s father, a fire-and-brimstone preacher. What starts as a party suddenly turns dark and deadly in this devilishly entertaining thriller.