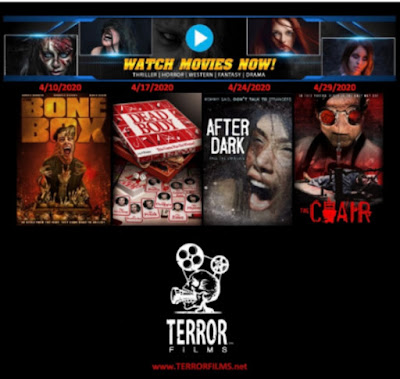 Genre Distributor Terror Films has teamed with the AVOD YouTube Channel, Watch Movies Now!
Terror Films has made its entire library available to Watch Movies Now. Watch Movies Now will kick off releases next week, starting with: The Bone Box (4/10), followed by Dead Body (4/17), After Dark (4/24) and The Chair (4/29). A Terror Film's movie will be released weekly on the Watch Movies Now channel and in most cases, the films will be available worldwide.
“This marks yet another strategic, AVOD partnership for our company and one more step toward our continued global expansion. It’s also very important we make our films available for FREE to as many people as possible during this difficult time. Watch Movies Now is a perfect partner to achieve this goal,” stated Terror Films president, Joe Dain.
Watch Movies Now is a global movie channel. This channel has over 142,000 subscribers (and growing), with more than 12 Million views per month. Watch Movies Now is the leading drama and thriller channel on YouTube (in German speaking territories).
Posted by A Southern Horror Fan