My Review Of "Rootwood" 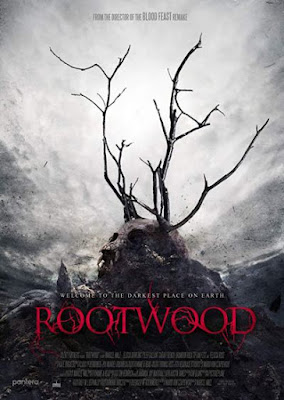 Rootwood follows two students who host ‘The Spooky Hour’, a podcast about paranormal phenomena and urban legends. When they are hired by a Hollywood film producer to shoot a horror documentary about the curse of The Wooden Devil, they smell their chance to become famous. Together, with their friend, they enter Rootwood Forest and investigate the area to find out the truth about The Wooden Devil and his victims.

"Rootwood" offers a new crypto baddie in the form of an urban legend surrounding a wood devil. The story is more straightforward typical mockumentary, paranormal exploratory fare. It does break the monotony with some nice third person footage. The concept is intriguing, however the execution of the plot feels a bit messy. Far too much dialog and unnecessary exposition.

The acting has moments of quality, but there are some moments where the cast seem affectively removed from their characters. Still, "Rootwood" has some cool indie film royalty attached to it, which almost forgives the flubs found with the film. I did enjoy the twist, with a cheeky revelation in the final scenes.

The horror leans heavily on a creepy, atmospheric tone, with some cool locations. The night shots are sweet, chilling moments that become the major focal point. I wish more of the film was shot at night. There isn't much in the way of kill sequences, most happen off screen and we never get to enjoy the carnage of the situation. But, the creature concept for the wood devil is awesome and worthy of further exploration.

Overall "Rootwood" misses a lot of momentum as it gets started. To much time is spent building characters that are weighed down by too much dialog and exposition. It takes 55 minutes for anything exciting to happen but what we do get is a spooky urban legend, creepy creature concept, and Felissa Rose. Horror fans of indie, low budget filmmaking should check it out. It has some cool stuff worth watching. (2.5/5)
Posted by A Southern Horror Fan