My Review Of "Red Handed" 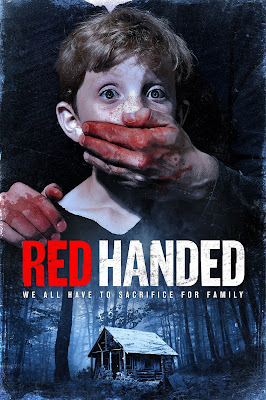 Not gonna lie, I found "Red Handed" curiously confusing. The film had my attention at first but it didn't take long for that momentum to wane, and soon turn to boredom. In principle the story reads as very interesting. However, the story's arc seems broken, and at times aimless. Not to mention that a lot of this film's plot trajectory is really predictable.

The acting, despite the film's flaws, is pretty tight. The cast is an attractive, mature group (aside from the obvious kid involved). It all does move a little too slow at times. The overall effect feels more of a psychological drama with moments of suspense. A couple of the characters seem to be overstated, and the female characters seem cliche.

The thrills and chills are really minimal. The suspense is mostly muted. "Red Handed" does have moments where the story starts to build up, but before some real adrenaline can kick in, the scene turns to more character based melodrama. Still there is a creepy atmosphere that hangs uneasily over the film.

Overall "Red Handed" offers a mild, mature psychological drama to movie fans. There is suspense, but it is weighed down by characters that feel ancillary, and exposition that seems to go on forever. Still, the film has an attractive cast that can act. Even with no real horror present some thriller fans may wanna check this one out. But horror fans will probably want to pass. (2/5)