My Review Of "This Is Our Home" 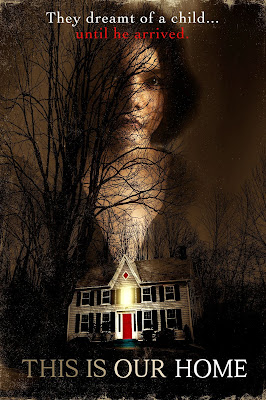 "This Is Our Home" is a psychological thriller directed by Omri Dorani and stars Drew Beckas, Jeff Ayars and Simone Policano. It is a heavy-toned, dark character study that creates a slow, suspenseful horror.

A chilling account of a struggling couple who, during a weekend getaway, are greeted in the middle of the night by a child claiming to be their son.

The story is a ominous character driven nightmare that feels foreboding from scene one. There is a dark energy that hangs over each scene, accenting both the dramatic moments and the thriller alike. Dorani manages to tap into an unease that some tragic relationships carry effortlessly. He does so without relying on cumbersome exposition.

The acting is stellar. Both Ayers and Policano are wonderful at bringing life to these characters in a way that humanizes them. The characters are recognizable and relatable. Beckas is charismatic and creepy with his portrayal of young Zeke. I did come across a few moments in the middle of the movie where I thought maybe the story got away from me. The feeling didn't stick.

Most of the horror is subjective. Beholden to the intensity and suspense that owns the film's atmosphere from scene one. Watching the steady deterioration of the characters, their relationship and the overall ominous situation works both psychologically and viscerally. The horror that unfolds is subtle but impactful.

"This Is Our Home" is a tense, dark thriller. Heavily stylized, the film taps into both the struggle of mental illness and stress of imperfect relationships without sensationalism. Plus the downfall of this couples weekend getaway is nightmarish and bizarre. Almost ethereal, not in a heavenly way but in a 'sleep-walking through a bad dream' way. This is just a really well done movie- save the ending. Not sure how I feel about that. (4/5)
Posted by A Southern Horror Fan