My Review Of "Crypsis" 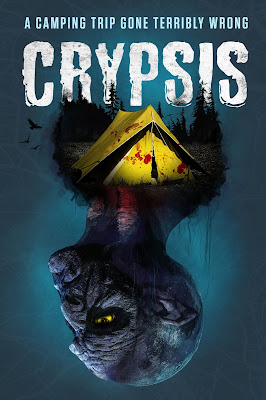 "Crypsis" is a creature horror written and directed by Paul Anthony Rogers. The film stars Rogers, alongside Michael Armata, Anthony Hoang, Jordan Mitchell-Love and Eddie Nason. It is a b-movie mashup of backwoods horror and over-the-top monster movie.

A group of friends make a bet to survive on an island. Unbeknownst to them, a mysterious old creature begins hunting them throughout the night. What began as an innocent bet quickly turns into a fight for survival. As night falls, this becomes a fight to the death that no one had anticipated.

"Crypsis" takes on traditional creature feature tropes. It is reminiscent of "Animal" and "Indigenous", mixing backwoods concepts of wilderness horror. It starts off with a barely convincible start. The story is high energy, and constant thriller. There is very little down time or respite from the action aspect.

The characters are stereotypical, annoying and surface. One or two in a cast is cool but with every character seeming to be a clone of every other then it is hard to connect with them. There isn't much realism built into these guys. The acting isn't all that great either. Still I did connect with a couple of the characters and I enjoyed the action sequences.

The horror elements are mostly done off screen with clever cut-aways and camera tricks. Most of them work, and the scenes with the creature coming in for the kill are my favorite moments in "Crypsis". I feel there really should have been a few really gruesome on screen kills though, the film teases us with the idea but never really delivers.

Overall "Crypsis" never lives up to all that it hopes to be. The story has some holes in it, the characters aren't developed enough to like, and the ending goes on two unnecessary scenes too long. Still there is some cool creature effects in "Crypsis". It pace is quick and the overall atmosphere is straight up horror. This isn't one for all horror fans but I think indie creature feature fans might find enough to like. (2.5/5)