My Review Of "Empathy Inc" 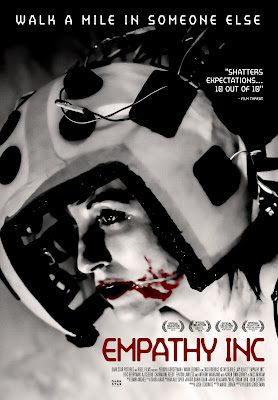 Hotshot venture capitalist Joel has a multimillion-dollar deal go up in smoke, and he and his actress wife Jessica are forced to move in with her parents and start from scratch. At the lowest and most desperate moment in his life, Joel meets old friend Nicolaus  and his business partner Lester, who are seeking investors in a new technology known as XVR—Xtreme Virtual Reality—from their company Empathy, Inc., which is said to offer the most realistic and moving experiences for users by placing them in the lives of the less fortunate. Joel gets the startup its funds but soon discovers that the tech's creators have far more sinister uses in store for their creation and that the reality it provides its customers isn't virtual.

The story is a creative, intimate play on relationships, opportunity and the risk of the unknown. It is highly conceptual, with elements of noir and surrealism. Yet somehow the complexity of the hunan experience and the almost mad science components blend smoothly. It allows for a comfortable, recognizable story that doesn't tax the viewer with confusion. "Empathy Inc" plays out more like a character drama with elements of body jumping fantasy.

The cast seem at ease with these characters, allowing for believable, and relatable personas. I mean they act as if these characters are who they are. If that makes sense. The in-laws especially, the only character that could have been tweaked would have been the antagonist. He came off more slacker hacker than mad scientist/ tech genius. But given the final act he makes sense after the fact.

The only downside with "Empathy Inc", for me personally was the lack of intensity when the thriller elements kick in. Especially those last several seems. Everything just happens because it happens. There is no real heightened suspense or tension that builds to real amp up the thriller edge. Still this is a clever, mature sci-fi movie that is worth checking out. (4/5)
Posted by A Southern Horror Fan