Poster And Trailer Released For "Clara" 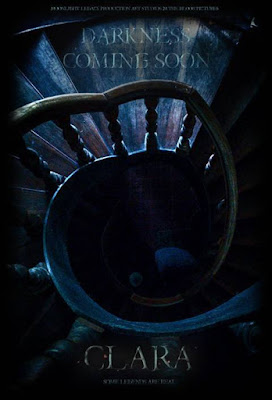 Helen Ludovisi is a young British woman who inherits an old, abandoned villa called Palazzo Malvasia. So Helen decides to visit Italy with her boyfriend Jacob and three experts from the UK Ministry of Culture and Arts. They have arranged to meet a delegation from the Bologna cultural assets department to discuss and plan the villa’s restoration. In the mid 19th century, the small daughter of the family, Clara was murdered and immured inside the villa by her father on account of her powers of clairvoyance. A shroud of fear envelops Villa Clara as people still believe it echoes with violence and brutality and that Clara’s ghost continues to wander among its walls. However this legend doesn’t stop Helen and her team from carrying out a preliminary inspection of the villa before starting restoration works. One of the team disappears in strange circumstances forcing Helen, Jacob and the rest of the group to stay at the villa beyond dusk to retrieve their friend.  After discovering they can’t get out of building, that they have been mysteriously locked in, they find themselves having to face the terrifying evils concealed in the depths of Villa Clara.