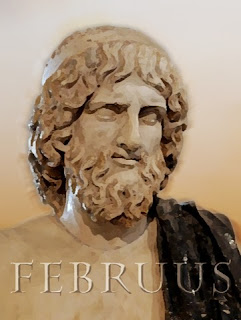 February dedicated to Old Roman God-Goddess Februus-Februa - purifier and protector of the home. Homes were cleaned and blessed, offerings of reparation were given, and peace was made.

An ancient Italian divinity, to whom the month of February was sacred, for in the latter half of that month great and general purifications and lustrations were celebrated, which were at the same time considered to produce fertility among men as well as beasts. Hence the month of February was also sacred to Juno, the goddess of marriage, and she was therefore surnamed Februata or Februtis.The name Februus is connected with februare(to purify), and februae (purifications).

Another feature in the character of this god, which is however intimately connected with the idea of purification, is, that he was also regarded as a god of the lower world, for the festival of the dead (Feralia) was likewise celebrated in February; and Anysius states, that Februus in Etruscan signified the god of the lower world (κααταχθόνιος). Hence Februus was identified with Pluto. When the expiator sacrifices were burnt, the people threw the ashes backwards over their heads into the water. 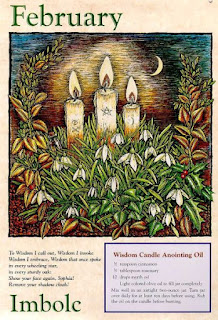 Imbolc or Imbolg (/ɪˈmɒlɡ/ i-MOLG), also called (Saint) Brigid's Day (Irish: Lá Fhéile Bríde, Scottish Gaelic: Là Fhèill Brìghde, Manx: Laa'l Breeshey), is a Gaelic traditional festival marking the beginning of spring. It is held on 1 February, or about halfway between the winter solstice and the spring equinox. Historically, it was widely observed throughout Ireland, Scotland and the Isle of Man. It is one of the four Gaelic seasonal festivals—along with Beltane, Lughnasadh and Samhain.


Imbolc or Imbolc-based festivals are held by some Neopagans. As there are many kinds of Neopaganism, their Imbolc celebrations can be very different despite the shared name. Some try to emulate the historic festival as much as possible. Other Neopagans base their celebrations on many sources, with historic accounts Imbolc being only one of th.
Neopagans usually celebrate Imbolc on 1 February in the Northern Hemisphere and 1 August in the Southern Hemisphere. Some Neopagans celebrate it at the astronomical midpoint between the winter solstice and spring equinox (or the full moon nearest this point). In the Northern Hemisphere, this is usually on 3 or 4 February. Other Neopagans celebrate Imbolc when the primroses, dandelions, and other spring flowers emerge.
February 1st honours St Brigid, the fifth-century nun from Co Kildare reputed to have performed miracles and healed the sick. The legend of Brigid stretches back to pre-Christian mythology, when she - as daughter of the chief of the gods, - was a goddess herself, associated with poets, healers, childbirth and inspiration. Originally a pagan festival, St Brigid’s feast day on February 1st marks the beginning of spring.Imbolc, also known as Candlemas and Groundhog's Day, occurs at the beginning of February. It marks the middle of Winter and holds the promise of Spring. The Goddess manifests as the Maiden and Brigid. The Groundhog is a manifestation of the God. Colors are White, and sometimes Red. It is a festival of spiritual purification and dedication. 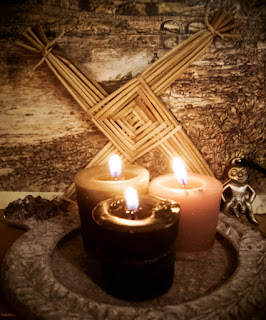 Thoroughly clean your altar and/or temple room. Do a self purification rite with Elemental tools -- cleanse your body with salt (Earth), your thoughts with incense (Air), your will with a candle flame (Fire), your emotions with water (Water), and your spiritual body with a healing crystal (Spirit). Bless candles that you will be using for rituals throughout the year. Invoke Brigid for creative inspiration. Take a Nature walk and look for the first signs of Spring. Reflect upon/reaffirm spiritual vows and commitments you have made.
For ideas and invocations go here : https://www.patheos.com/blogs/johnbeckett/2015/01/imbolc-a-solitary-ritual.html

And here: https://www.thoughtco.com/hold-an-imbolc-candle-ritual-for-solitaries-2562108
Posted by A Southern Horror Fan