My Review Of "Mermaid's Song" 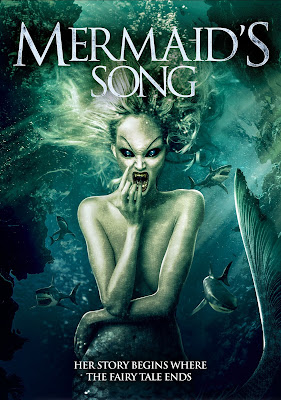 "Mermaid's Song" is a dark homage to Hans Christian Anderson’s The Little Mermaid. The film is directed by Nicholas Humphries, and stars Iwan Rheon, Katelyn Mager, and Brendan Taylor.

Set during the 1930s depression, "Mermaid's Song" tells of young Charlotte, who is struggling to keep the family business afloat. When gangster Randall offers to pay off the family debt - he demands some illegal changes to the business. But Charlotte, like her mother before her, is a mermaid capable of controlling humans with nothing but her voice, which creates a battle between all of those who want Charlotte's magical powers for themselves.

Nicholas Humphries' fairytale is a dark dabble into a troubled life during a harsher period of American life. The 1930'second was the last great decade of some truly depressing and dark times,  a stark reality of the decadent and the derilect- no real rights save for the wealthy,  and not much compassion beyond a mother's love  (and based on the cap I watched based on the times,  even that was a 1 in 5 chance - if you were lucky.) Anyway,  "Mermaid's Song" encompasses a slice of that existence,  wrapped in a coming of age tale,  garnished with a flare of dark fantasy.

The settings and period trappings are nice, well conceived elements that help to really frame what becomes an almost Gothic story. The characters are traditional souls similar to the characters in 'Damnation', a series set in a time just before Nicholas Humphries' story. Most are two-dimensional but the main character, Charlotte and the antagonist,  played by Rheon really stand out.

The special effects,  although mostly CGI, are quality works that achieve the necessary effect that Humphries is going for. The creature design and transition sequences are cool, entertaining moments. The sound effects and music score are mixed bagged notes that, at times, seem out of place,  but for the most part blend nicely with the pace of the story and creates a nice slow stride.

"Mermaid's Song" is marketed toward the horror fan, but it is more of a period drama with dark fantasy edges. The horror elements are mild,  however there are moments in the film that explores some elements of sex trafficking,  exploitation of women, and child molestation. Still those are mostly insinuated, and never pushed beyond respectability. Just keep in mind that this is no kiddie flick. (3/5)
Posted by A Southern Horror Fan