"A Beginner's Guide To Snuff" Gets October Release 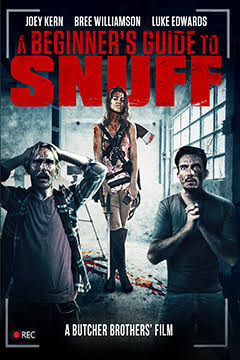 The Butcher Brothers' horror comedy "A Beginner's Guide To Snuff" gets October 16th release date. The film is directed Mitchell Altieri and plays out the mayhem that unfolds when a fake snuff film goes horribly wrong. It stars Joe Kern, Bree Williamson, and Luke Edwards.

Two brothers decide to make most convincing pseudo-snuff film EVER and decide not to tell the Victim that it’s “staged” – of course, the brothers’ whole plan goes south – as they picked the wrong victim and soon find the tables turned on them!!