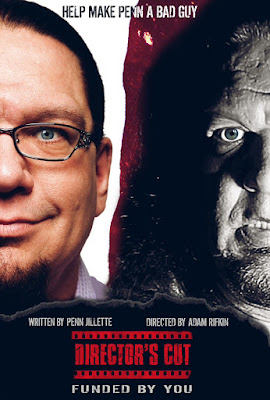 Check out the Slamdance Trailer Released For surreal horror "Director's Cut". The film is directed by Adam Rifkin and stars Penn Jillette, Missing Pyle, Harry Hamlin, Lin Shaye, and Gilbert Gottfried. " Director's Cut" is an experiment in visual artistry taking a simple concept and expanding it into the found footage genre with innovative style.

Premiering in Park City as Slamdance Special Screening Opening Night Film. The horror/black comedy follows a deranged lunatic named Herbert Blount (Jillette), who donates a large sum of money to a crowdfunded horror movie which lands him on set, after which he aspires to replace the real director of a movie and make it his own by steeling the footage, capturing the lead actress (Pyle) and reshooting scenes the way he’d like them for his own version. The story is told via the director’s commentary over this new and improved version of the film.