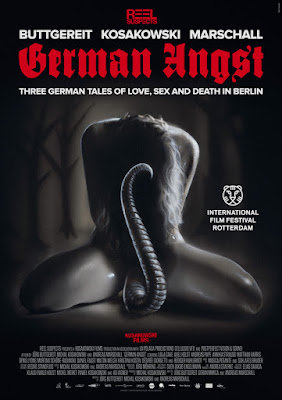 A while back I posted a very impactful poster teasing an upcoming trilogy of terror. The film is titled "Geman Angst" and the poster art conjures all sorts of emotions and impressions for what will surely be an interesting horror flick. Now the film has a trailer to go with the poster, as well as some early news on release.

The first short, "Final Girl," deals with a lonely woman and her guinea pig, a gagged man. The second short feature, "Make a Wish," starts off as a romantic interlude, until a group of hooligans invade the scene; murder threatens this landscape. In the final short film, "Alraune," events take place in a sex club. Here, a drug heightens sexual experiences, but it also has strange side effects.