My Review Of "Army Of Darkness" Collector's Edition By Scream Factory 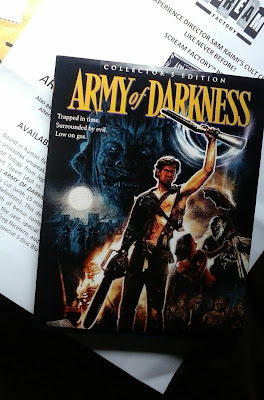 Scream Factory has just released their Collector's Edition of Sam Raimi's 80's cult horror, "Army Of Darkness", just in time for Halloween. And the premiere of Starz Originals series 'Ash VS Evil Dead' Halloween night. If, like me, you haven't set out since the first time you saw "Army Of Darkness" to collect the various versions of the film, then look no further. Scream Factory has taken care of us on this one with edition.

I received my collector's edition blu-ray of "Army Of Darkness" in the mail! Right off I enjoy the cover art. It has an almost late 70's horror novel design.The blu-ray case has the same artwork as the protective sleeve. It is pretty cool artwork, mostly because it has a similar style to the artwork from the old 'Night Gallery' series.


Bound in human flesh and inked in blood, the ancient "Necronomicon" – the Book of the Dead – unleashes unspeakable evil upon mankind in director Sam Raimi's (Darkman, Drag Me to Hell) outrageously hilarious third chapter in his Evil Dead Trilogy.
Back to do battle with the hideous "Deadites," Bruce Campbell returns to the role of Ash, the handsome, shotgun-toting, chainsaw-armed department store clerk from S-Mart's housewares division. Demonic forces time warp him – and his '73 Oldsmobile – into England's Dark Ages, where he romances a beauty (Embeth Davidtz, The Amazing Spider-Man) and faces legions of the undead. Can Ash save the living from the evil dead, rescue his girlfriend, and get back to his own time?
"Army Of Darkness" is a fun, and off-beat horror comedy that confused the heck out of me when it first came out. Not with the story itself because that part rocked. Mostly the concept and the quality of the stop-motion, and special effects. But as the years went on, I found myself watching "Army Of Darkness" on many occasion, and loving something new about it ever since. And the Scream Factory Collector's Edition gives us 4 versions of the film plus and insane amount of new material, all in a pretty extensive selection of Special Features choices. 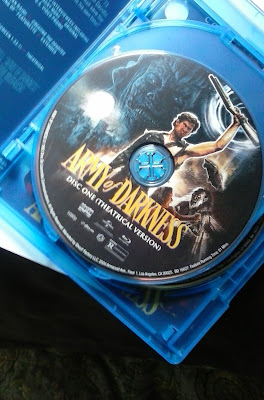 Disc One has the same artwork as the cover but it is what's on the disc that has me delighted to own this collection. Hello, new Medieval Times Featurette! 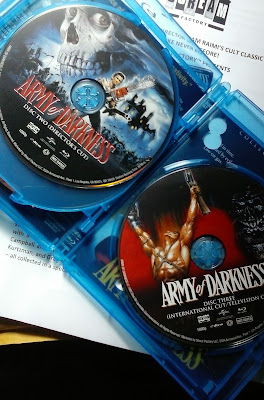 Disc Two and Three have the original artwork from the film's early DVD and VHS artwork on them. There are even more newbies on these discs as well. Two has a new BTS footage with KNB Effects. There is also new stills, storyboards, and new deleted and alternative footage.

I have to say that I am thrilled with what Scream Factory has done for this new edition of "Army Of Darkness". It offers four releases of the film, theatrical, director's cut, international and the TV version with extra footage! Killer! Right off I went for the TV version first! For some reason seeing that one given love along side the theatrical release is pretty cool. Now I can't compare this release of "Army Of Darkness" to other releases because the only other copy I have is a basic DVD version with just a few special features. Nothing close to the scale of what Scream Factory has collected for "Army Of Darkness".

Even with all the new stuff, as an older fan it is the vintage material on these discs that will get the most love from me. I am an addict for old horror and sci-fi movie trailers and the promos for early home entertainment release so I can't wait to check those out. I have to say that this is an impressive edition. The three discs with all the new material, vintage material, new artwork, and 4 versions of the film is well worth it for any horror movie fan. "Army Of Darkness" is out now at Shout! Factory so go check it out!  I am off to obsess over some more Ash and Deadite madness with the International cut.