My Review Of "Gore Orphanage" 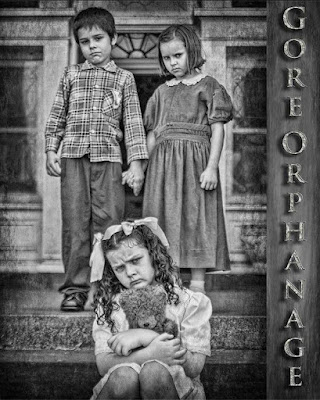 "Gore Orphanage" is Emily Lapisardi's mashup of  true crime events that lead up to the hauntingly pervasive urban legends surrounding Gore Orphanage in Ohio, and Mary Bell of Newcastle, England. The film stars Maria Olsen, Bill Townsend, Keri Maletto, Emma Leigh Smith, Brandon Mangin, and Nora Hoyle. "Gore Orphanage" is a microbudget slice of macabre theatre that is chilling, disturbing, and -quite frankly-sad. But then most stories revolving around murdered orphan children usually are...

Synopsis: When 9 year old Nellie's entire family dies, she is taken to Gore Orphanage. She quickly learns that some things are worse than losing her own family and she has to fight to survive before she ends up dead also.

The story that Lapisardi and writer Cody Knotts creates is very stoic, cruel, and captivating. I say cruel because the crimes against these-the most vulnerable of humanity-are truly horrific. And Lapisardi, nor Knotts, shy away from telling this cruelty with vivid, chilling bluntness. Now there is a bit of a theatrical Gothic-ism written in, especially with character drawing. For empathetic persons, or those with a soft spot toward child actors, "Gore Orphanage" offers a bit of an extra bit of disturbia. You can"t help but cringe at the duality of fragile innocents against vicious cruelty.

The cast give pretty decent portrayals, there are a few small moments when some of the younger actors seem a bit nervous on camera, but for the most part the characters come alive, and you hate that they are dealing with-yeah I am gonna say it again-such CRUEL circumstance. I keep saying it because the whole time I watched the film all I thought was- "You f*cking cruel bitch! Kill that molester and die!" and "Somebody save those poor children!". Anyway "Gore Orphanage" does deal with some sad subject matter, and presents it with a classic, crestfallen energy.

The special effects are minimal, most of the horror is just in the suggestive nature of the crimes committed against these children, the very auteur presentation of the antagonist matriarch of the film, played by Maria Olsen, and the near slog-styled atmosphere. The soundtrack is more of a simplistic accent that adds context to certain moments, as opposed to films that create an almost companion beast for their stories. Sometimes lack of an all out soundtrack is noticeably missing from a film, however with "Gore Orphanage" the more stripped down, focus on the story, approach really helps to create a chilling, captivating piece of dramatic horror.

Overall "Gore Orphanage" is a decent piece of Gothic melancholia, it will not appeal to those die hard, "scare factor" horror fans that want visceral carnage. It does drag at times as far as energy level and thrills are concerned. It isn't that way through the whole film, and the dark nature of the story, theatrical, almost surreal design of the adult characters in the story, and fate of the children do keep the story entertaining. "Gore Orphanage" is a worthy horror/drama that indie fans will enjoy mostly because it is inspired by two very real, tragic events in history-both of which gave rise to urban legends that still haunt pop culture today.
Posted by A Southern Horror Fan