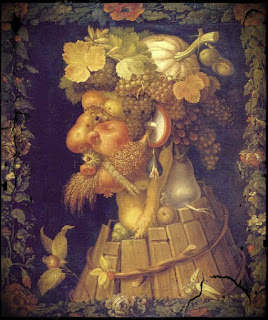 Today, August 13th, is the annual celebration known as Vertumnalia, which in ancient Roman was the day to honor the god of seasonal change, gardens, and plant growth- Vertumnus. Of course most of us just celebrated the start to the harvest season with Lammas which celebrates much of the same aspects of harvest, time of plenty, and the gods of seasons. But if you are like me then you just love a reason to honor and celebrate the gods, the garden, and nature. We are still in summer, food and nature are ripe and bountiful. We all benefit from Gaia's blessings given forth to her children by the will of the gods who watch over and protect us. Anyway that is my interpretation and beliefs for how I embrace Vertumnus on this day!

The Vertumnalia also celebrated the wood nymph Pomona, whom Vertumnus tricked into talking to him by disguising himself as an old woman and gaining entry to her orchard, then using a narrative warning of the dangers of rejecting a suitor (the embedded tale of Iphis and Anaxarete) to seduce her. Pomona  was a goddess of fruitful abundance in ancient Roman religion. Her name comes from the Latin word pomum, "fruit," specifically orchard fruit. 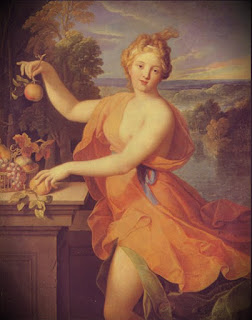 In the myth narrated by Ovid she scorned the love of the woodland gods Silvanus and Picus, but married Vertumnus after he tricked her, disguised as an old woman. She and Vertumnus shared a festival held on August 13. Her priest was called the flamen Pomonalis. The pruning knife was her attribute. There is a grove that is sacred to her called the Pomonal, located not far from Ostia, the ancient port of Rome.

Pomona was the goddess of fruit trees, garden, and orchards. Unlike many other Roman goddesses and gods, she does not have a Greek counterpart, though she is commonly associated with Demeter. She watches over and protects fruit trees and cares for their cultivation. She was not actually associated with the harvest of fruits itself, but with the flourishing of the fruit trees. In artistic depictions she is generally shown with a platter of fruit or a cornucopia.
Posted by A Southern Horror Fan