My Review Of "The Devil Of Kreuzberg" 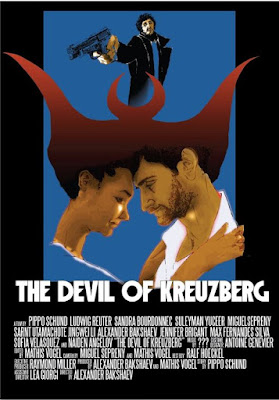 Alexander Bakshaev's "The Devil Of Kreuzberg is a trippy dance of melancholia and dreamscape in giallo styled grandiosity. The film stars Ludwig Reuter, Suleyman Yuceer, Naiden Angelov, Justine Assaf, Alexander Bakshaev, and Sandra Bourdonnec. The story revolves around Linda and Jakob and Jakob's best friend Kurt. Jakob is plagued by nightmares of Linda killing him, his friend is a hit man, but not by choice by necessity, Linda is not quite normal either, and Jakob is a writer struggling to keep is small amount of success due to his breakdown. It is all told in a waltz of classic Italian styled crime noir, and art-house expressionism.

The official synopsis: Linda and Jakob are happily in love until one night, Jakob begins to have horrific nightmares in which Linda appears as a darkly seductive creature. Tormented by these visions, Jakob asks his best friend Kurt to murder Linda for him, thus beginning a slow descent into madness. Unbeknownst to the two men, Linda is acting under the control of an ancient family curse. Will her love for Jakob overcome the powers of death? Will Kurt give in to his violent urges and kill to protect his friendship? Is there a way to escape the Devil of Kreuzberg?

The story is a bit choppy, but if you let the wild, adventurous avant style just carry you through the film you get a pretty good notion at what is happening with these characters. It is a very surreal film filled with creative, odd moments of off beat situations, obscure dialog with an almost complete emotional detachment by the characters. There are also pretty killer scenes that embrace all that is giallo, or Italian noir- which ever you choose , Bakshaev shows his love all that is Eurocentric Avant cinema. The acting is well done, and the cinematography is great. For me personally the soundtrack, especially the instrumental 80's inspired music is the real star of "The Devil Of Kreuzberg". It held the film together and actually made the mix of dreamlike moments of odd behavior, and the thriller scenes with character interactions work nicely together. The film is off beat and there is very little actual horror in the film, but it is all just underground, indie art-film creativeness.

Overall I found "The Devil Of Kreuzberg" captivating, and hypnotic. It is very stylized, and heavy on the art-film side as opposed to giallo so a lot of people are not gonna get Alexander Bakshaev's vision here. I for one fill jipped for not knowing about this director earlier on, now I have to go back and watch his earlier works. There is a big play on fantasy, corruption of self, and questioning of emotion and relationships in the story that play out cleverly. The backgrounds and scenes are interesting and add to a more experimental side of avant-garde. There are elements of Warhol and Hugo Ball that echos through inspired concepts clearly meant as an homage to D'amato and Bava. I enjoyed "The Devil Of Kreuzberg" but I admit that it isn't a film that will reach a large fan base beyond the "film as art" crowd.
Posted by A Southern Horror Fan