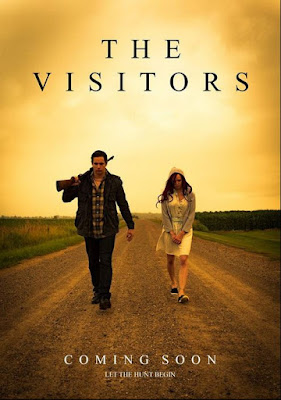 "The Visitors" is a indie creature feature currently seeking funds over on Indiegogo.com. The film is described as being a blend of influences from John Carpenter's "The Thing" and "Evil Dead". Well that has my interest right there! This type of "seventh kind" contact offers more horror and gore and really gives an opportunity to be chilling, intense, and bloody! Yay!

"The Visitors" is directed by Jeremy Hull and stars Mike Gajewski, Rachel Claire, Ava Dalgaard, Anna Rodriguez. Principal photography will begin on August 28th, 2015. The location is a pretty creepy piece of isolated farmland and the setting is is ideal for the story that Hull has created. I look forward to seeing this one released!

After settling into their new home in the country, the Cooper families night of peaceful relaxation is brought to an abrupt halt when two mysterious drifters come knocking on their door. As the drifters attempt to unleash a strategic plan of terror upon the unsuspecting family, their plan is soon foiled by a flesh eating creature fixated on only one thing; survival. In order for the family to survive the night they must entrust in the one person who once sought to harm them, but as the events of the evening begin to unravel it becomes clear that there is more to this situation than meets the eye and more than one monster lurking in the shadows.