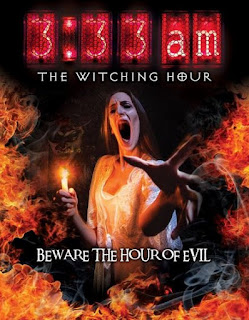 Daniel E. Falicki's "3:33 AM: The Witching Hour" is a paranormal thriller with off-beat theatrical flare. The film stars  Matthew J. Dennis, Sheri Beth Dusek, Scott Baisden, and Chris Kotcher. "3:33 AM" blends traditional paranormal, thriller driven suspense with quirky, theatrical drama in this character study of self "rediscovery" of a man trying to rebuild his shattered life.

Synopsis: After two years in prison, John Spinelli is a free man. Upon his release, he moves into a halfway house known as ''Wellhome'' which is notoriously overrun with looney tenants and strange occurrences that happen at 3:33 AM. John simply wants to get on with his life, stay clean and get his life on track, but he quickly becomes entangled in a mysterious web of bizarre murders. As he grapples with his mad mix of macabre neighbors, John realizes something evil governs his new neighborhood. Every night, outside his window, lights flash and strange noises come from the house next door which has a dark and sinister past. Can he convince authorities he is innocent of the murders? Or will he wish he was back behind bars?

The story that Falicki gives us in this bit of melodrama and macabre is a pretty nice bit of emotion and human connection. The lead character and the ordeal he faces getting his life back on track is touching, and the actor gives an authentic performance. I am a little conflicted about the over all story with the many other characters here, for the most part I didn't buy into the personas of the secondary cast of "crazy house mates" that call Wellhome home. However the characters John, Father Stark, The Investigator , the girlfriend, all give such strong performances that I really invested into the this story.

The special effects in "3:33 AM" are the standard mix of CGI spookiness, and creepy settings. Most of it is the practical trickery that you would see at a well done haunted attraction and the CGI paranormal stuff looks good and helps to bring in the macabre, ghost story elements of the movie. The sound effects and music is pretty well put together and really set the tone of Daniel Falicki's story. It creates the needed emotional connection to the dramatic moments and when the more chilling atmospheric stuff happens the sounds really help deliver the vibe. It ins't anything stand out or "out of the box" but it is well thought out and put together nicely.

Overall I am split about "3:33 : The Witching Hour". I really enjoy pretty much all of Daniel Falicki's work, and I also like the very odd, creative story that he weaves here. I just didn't really get a complete picture of what the story was, it was like stepping in as the drama unfolds and thinking "man this shit is crazy" but really wanting to hang around and just watch it unfold. Anyway, I liked the paranormal stuff, the settings, and the main characters, I just had a hard time really fully understanding on why or what actually was happening beyond what was shown on camera or John's situation. Why the heck were these ghosts so evil? Why was this happening just as John moves into Wellhome, and what tied it into the witching hour? It isn't Daniel Falicki's best work but is still a strong story with lead characters that you really feel like investing in.
Posted by A Southern Horror Fan