My Review Of "Indigenous" 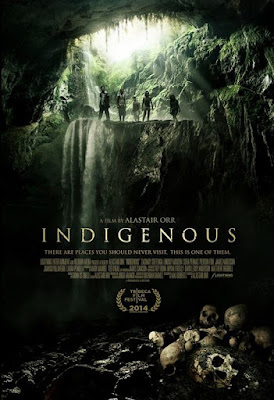 "Indigenous" is a travel horror, creature feature that eats at your nerves! The film is directed by Alastair Orr and stars Zachary Soetenga, Lindsey McKeon, Sofia Pernas, Pierson Fode. The story follows a group of friends on vacation in Panama. After hearing of a local legend of a slice of forest forbidden to travelers, the group venture into the wild and discover that there is way more to this local legend. And I swear there was several times that I jumped, cringed, and held my breath. Not a lot of films do that to me these days but films like this, or cannibal movies usually do.

The story is your typical joint with a sexy young cast on international vacation to Central America, Panama to be exact. There vacation turns into on heck of a nightmare when they choose to venture off the itinerary for a impromptu trip to a local forbidden piece of the Panamanian jungle. One that has a horrific legend of creatures that stalk anyone who dares enter the area. "Indigenous" sets up nicely for some suspense, intense thrills. Sure the cast of characters are cliche and scene in pretty much every film with this "road trip horror " concept. But, just like many of the films it compares to, "Indigenous"  gives good thrills. It stays serious with only cheeky banter between mates offering any humor, the setting goes from one of beauty that beckons tourists to one of a more primal, unnerving nature. Plus the action is pretty much nonstop the minute they hit the tree-line!

The special effects are tight. The gore, quick scare tactics, and creature design are nice, reminds me of the anthropomorphic cannibal creatures in "Descent" and 'Wayward Pines'. There could have been more glorification of the gore in my personal opinion, but there is enough here to really sell the bloody kill scenes. The sound effects and music is a blend of up beach vacation enthusiasm, and intense, atmospheric uneasiness. A lot of the thrills come with the cast's ability to give such convincing performances during the terrifying scenes. Plus Alastair Orr creates a strong story around the beliefs of the Chupacabra that is slightly different but just as scary as the small dog-like, winged version. "Indigenous" is a really intense, entertaining horror film that is worth the watch!
Posted by A Southern Horror Fan