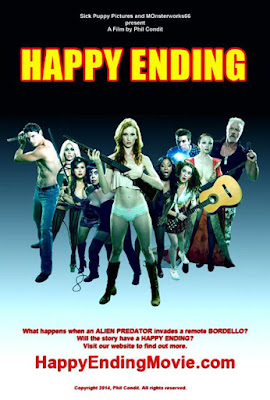 A new promo poster has been released for the horror comedy "Happy Ending". The outrageous and colorful satire brings some sci-fi flavor into the three-film project planned for haRFMFul Productions, Sick Puppy Pictures, MOnsterworks66 and Lion Arch Productions, set to film later this year or early 2016.

Happy Ending fans, who have been following the film's progress, will remember that, at Madam Wang's House of Happy Ending (military discounts apply), the Madam and her lovely ladies of the night will be fighting an invading alien to save themselves, their johns and their planet.