My Review Of 'A Blood Story" 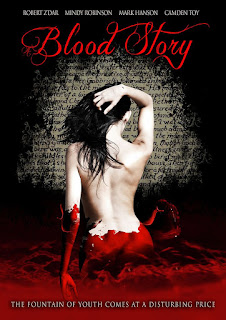 The synopsis:  Three strangers find themselves at a villa, each with the same goal of discovering the Fountain of Youth, rumored to be nearby. One by one they succumb to the carnal perversions and depraved delights provided by the villa, unaware they are pawns in the resurrection of a centuries old evil.

Hollow's story is a stark expose of one's drive for eternal youth and beauty obtained through the darkest capabilities. Much like Elizabeth Bathory, these characters thirst for immortality, youth, and a place at the top of society's creme. The characters are a bizarre collection of Gothic personalities. "A Blood Story" moves pretty slow and steady with lots of melodrama and theatrics. The tone and pace of the film never really reaches the fever-pitch of thrillers or suspense horror stories, but it does pull you in with plenty of dialog and character development.

There are a few moments of horror effects that really bring to life the dark subject matter of the film. It isn't really meant to create a sense of chilling horror. The scenes are more of atmospheric macabre. Most moments that use special effects and blood are mixed with erotica so even these elements of "A Blood Story" stay more fantasy. Still the practical effects and horror moments are strong, quality aspects that do heighten the overall effects of this film.

"A Blood Story" is a mature, fantasy horror that is reminiscent of 70's Amicus style of Gothic horror fantasy films. It does tend to stay on the more "slow burn" melodrama side of horror, but with such Shakespearean characters and plenty of blood washed T&A there is plenty to entertain. The film isn't going to hit any high spots with die hard horror fans that like faster paced stories filled with gore or violence. "A Blood Story" is a visual slice of the macabre which plays on the whole "Bathory styled nightmare".
Posted by A Southern Horror Fan