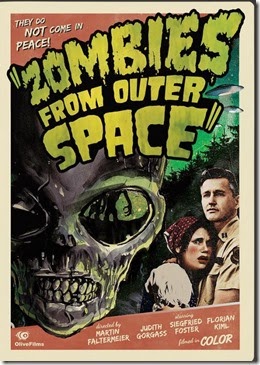 Rural Bavaria. The late 1950’s. Something very strange is taking place. When Maria (Judith Gorgrass) happens upon the dead body of a woman, little does she realize the terror that will unleashed in Zombies from Outer Space.

Noted scientist Dr. Robert Hoelzlein (Florian Kiml) and American Army Captain John Welles (Siegfried Foster), both brought in to investigate the crime, soon butt heads over the case and their mutual attraction to Maria. Romance takes a back seat when more bodies are discovered. Who or what has caused these mysterious deaths?