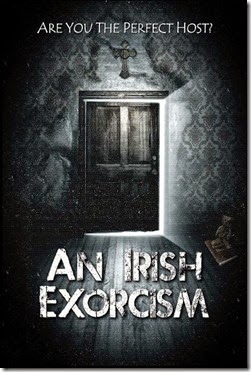 The supernatural horror “An Irish Exorcism” is due out on DVD May 12th, 2015. The film is directed by Eric Courtney and stars Aislinn ni Uallachain, Dillon White, Brian Fortune, Paddy C. Courtney, Elaine Hearty. “An Irish Exorcism” is shot in found footage style and based on an actual case. It is a story about an Exorcism carried out in a country house in Ireland. The tale deals with the effects of the Exorcism on the six individuals involved, two Priests, two students documenting the event, and a mother and daughter.

In her final year at school, Anthropology student Lorraine decides to film her final project – the subject of exorcism within the Catholic Church. Recording interviews with priests from the local diocese, she stumbles upon Fr. Byrne, an older priest who is currently helping a young mother whose daughter is apparently possessed by a demonic force. The curiosity of Lorraine, along with her camera operator, Cathal, leads them down a dark path of discovering the terrifying truth, and things go from strange to worse as all involved become entangled into a frightful journey to save a little girl’s life.