My Review Of “The Dooms Chapel Horror” 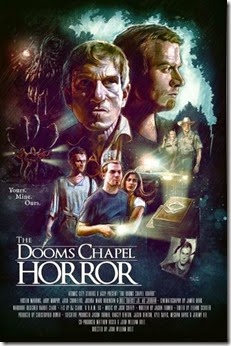 “The Dooms Chapel Horror” is a blend of classic creature-feature and contemporary cult horror wrapped in found footage. The film is directed by John Holt and stars Bill Oberst, Jr., Austin Madding, Abby Murphy, Shaun Gerardo, Josh Robinson, Josh Cornelius, Steve Crowley, Allan Walters, Wendy Keeling. The plot follows a young man revisiting his home town past wrought with tragedy, that soon discovers a new horror unfolding in the community, one in which he is to blame. It takes on an organic, home movie feel at the beginning but soon spirals into a chaotic mangling of docu-horror and classic monster movie madness.

The story is a somewhat complex tale that revolves around the second son of a prominent farming family in rural America. A dichotomy of character shows the conflict of a guy who never lives up to his family’s hopes, strangled by the shadow of his older brother’s death, and forced to face his haunted past under the spotlight of a documentary film crew’s light. The story that warrants this framework for the story is one I had a bit of trouble swallowing. I never got what made him important enough for a documentary. Sure tragic events, small town equals big talk but beyond that I never understood what made him so important that a documentary crew decided to revisit the story. However it does set up the found footage angle that moves us into a truly amplified creature feature.

The acting is hit or miss with a lot of the cast in “The Dooms Chapel Horror”, more so with over-acting than not living up the task. Most of the characters feel authentic enough, but I felt several of the characters could have toned it down somewhat and still been just as impactful. Still Holt directs a nearly perfect found footage concept with events unfolding fast, chaotically, and full of emotion. Once the cult aspect and the lead character’s actions that created the horror unfolding takes off, “The Dooms Chapel Horror” morphs into a thrilling nightmare. At times I got lost in the events unfolding before me, and yet at other times the momentum falters a bit before picking back up.

The special effects and soundtrack featured in “The Dooms Chapel Horror” is a show of true indie quality. Mostly suggestive moments that hint at the horror aspect shown through shaky cam, poor light, and creative angles create the nightmare easily. The creature effects are practical FX works presented in limited amounts on screen that are believable. A lot of films linger too long on cheap props and kill the intended effect and overall momentum of the scene, but that isn’t the case with “The Dooms Chapel Horror”. Between the special effects and camera tricks there is a real horror presence on screen. The soundtrack, effects do an expected job of creating the mood and atmosphere but are limited, allowing for most of the actual sounds caught on video to do most of the work at creating the moments.

Overall, “The Dooms Chapel Horror” manages to give us a nice, homegrown indie feel with some very electric moments. There is some drag at the beginning of the film, as we build up to the main event but once the film gets going it keeps at a pretty intense pace. The acting is as I said before, hit or miss, and it is inconsistent so it never fully kills the flick, only short moments fall flat. The effects aren't spectacular but they are creative, quality moments that work. The last 3rd of “The Dooms Chapel Horror” is pretty tight, gives some cool thrills and has a wicked ending that I enjoyed. Definitely check out “The Dooms Chapel Horror” because there is enough going right in this film to enjoy.
Posted by A Southern Horror Fan