Trailer And Poster Released For “Refuge” 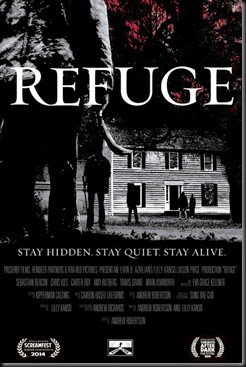 Andrew Robertson’s “Refuge” will premiere at Toronto After Dark Film Festival on October 22nd. The film is a post-apocalyptic horror described as a blend of “The Road” and “The Walking Dead”. Sounds pretty cool to me! “Refuge is directed by Andrew Robertson and stars Sebastian Beacon, Chris Kies, Carter Roy, Amy Rutberg, Eva Grace Kellner and Mark Ashworth.

“Refuge” is a suspense-thriller about a family struggling to survive in the wake of a great catastrophic event. As food and supplies dwindle and the threat of marauders becomes more apparent, the family must ultimately face the decision to either stay in hiding or go in search of an elusive mansion they've heard of - that may or may not exist.