My Review Of ‘Ghost Bride” 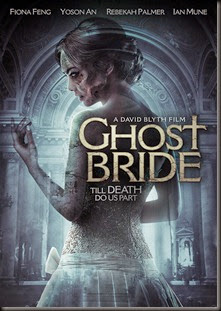 David Blyth’s “Ghost Bride” is a paranormal thriller that takes on struggles of the generational and cultural dichotomy. The film stars Yoson An, Rebekah Palmer, Fiona Feng, Ian Mune, Geeling Ng, Catheryn Wu and Charles Chan. “Ghost Bride” is even tempo story that revolves around a young Chinese expatriate who is trapped between the path chosen for him by centuries old traditions and the path he has chosen for himself. Pressured by an ailing mother to carry on with the tradition of having a Chinese bride selected for him, and struggling to hold to the relationship he has with his New Zealand love, Jason faces forces far beyond his control as he becomes a pawn in another mother’s dark plan.

David Blyth has created a nice, steady psychological dilemma in “Ghost Bride” that really draws on the conflicts of cultural past and individual present that is a very real, and very murky journey for many young people today. To abide by the ways of the ancestors or forge an independent path for one’s self. Then throw in a sinister match maker with ulterior motives and the paranormal, and soon things get down right deadly. This is a really well crafted ghost story and the cast do great jobs and bringing these characters to life on screen. The film does rely completely on melodrama and personal conflict for most of the suspense so the thrills are a bit more subdued than one would expect going into the film. Just a note for anyone setting out to watch-not a criticism.

The special effects are minimal, a few quick frame switch moments meant to create a supernatural element, mostly practical stuff, with very minimal CGI. This isn’t like the bigger budget Asian ghost stories with heavy-dark- effects that get chilling. “Ghost Bride” takes a more casual, restrained approach where the macabre nature of the story, unease of character situations, and a steady instrumental overture combine to tale a story of tragedy, desire, and struggle. Blyth presents us with a mature, respectful story that revolves around Eastern folklore, and familial guilt. (And I thought Western mothers knew how to milk the guilt thing.)

Overall “Ghost Bride” is a strong story that is told with nearly perfect continuity. The beginning is a straight forward set-up that sets the tone for the whole film. There are moments that get confusing in the middle section that could have been tied in better-mostly with the introduction to the ghost element that doesn’t really solidify until the last act. Of course my confusion could have been purely cultural differences and me not fully getting the Chinese traditions. This is a nice, mellow ghost story that never really escalates or falters far from the even tempo so no major chills or thrills are present. That was a bit of a bummer for me personally, but still “Ghost Bride” is a nice little macabre film.
Posted by A Southern Horror Fan