My Review Of “The Horror Network Vol. 1” Anthology 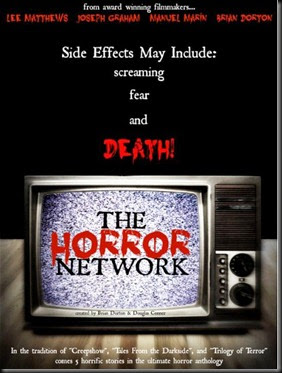 “3: 00 AM” is directed by Lee Matthews and stars Charlotte Armstrong as a woman harassed by late night calls. It is a creepy, paranormal nightmare that plays in an even-paced, scary story situation. The short film opens up “The Horror Network Vol. 1” and moves us right into the feel of what reelEpic envisions for the anthology. “3:00 AM” is also the tamest of the short films within this anthology. It almost gives a false sense of light-tempered horror, which is perfect considered the dark, evil that comes after this one.

“Edward” is a surreal, classic styled horror short that feels like an episode of “Tales From The Darkside”. The short film is directed by Joseph Graham and stars  Nick Frangione, Artem Mishin, Premstar Santana. The story involves a young man in therapy. Dealing with a sleep walking issue and the recent death of one of his peers. “Edward” takes the twisted, psychosomatic battle of one’s inner struggle with good and evil into an area that screams of Hell.

“The Quiet” is a little bit darker still, with the focus on a deaf teen in the midst of a terrifying ordeal. There is a bit of black humor to this short film that takes on a “Twilight Zone” but amplified tone. Directed by Lee Matthews , “The Quiet” brings to live the fear that pretty much all young girls shiver over, if they don’t then there is something wrong with them. The world, dominated by men, must seem terrifying at times to women, I imagine. Add to that the fact that the young girl in the film is deaf in one ear and uses a hearing device to hear in the other, this situation is a true life nightmare.

“Merry Little Christmas” is something straight from the bowels of Hell’s hell. It is dark, disturbing, brutal and brilliant. Directed by Manuel Marin, this horror short takes man’s cruelty and the aftermath into levels of darkness only survivors of cruelty could ever really understand. “Merry Little Christmas” is far from a holiday horror and yet the fact that it happens on the holiday somehow disembowels the joyful occasion. It offers a bit of depravity in putting the horror bluntly in your face, I could not turn away and yet I felt as if I was about to crash into a wall with razors ready for my flesh.

Brian Dorton’s disturbing serial killer short film, “The Deviant One” ends the anthology with a bit of calming horror – calming in the sense that it brings you back from the very bloody, ashy floor of hell, up to more palpable levels of depravity. The short is still disturbing, told in an arthouse/surreal style with no dialog, “The Deviant Ones” highlights the nightmare of not knowing really who your neighbors are, or the horrors that they are capable of.

Overall “The Horror Network Vol.1” drags you down into the dark, scary places you never really want to go, but often find yourself peeking into through pinched lips and slits in you hand-covered eyes. The anthology is creepy, intense, horrifying and brilliant. This is truly a collection of nightmares that scream for all horror fans to see. “The Horror Network Vol. 1” brings a level discomfort that is addictive as it is entertaining. This series challenges you at times, often daring you to look deeper as the brutality slaps you in the face. I loved every minute of this anthology. A very mature, and chilling film that is sure to be an instant cult classic.
Posted by A Southern Horror Fan