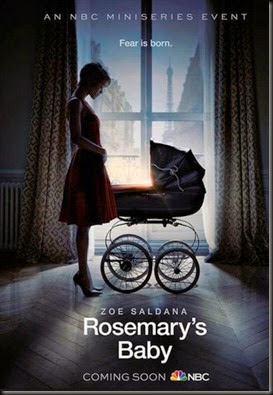 NBC has announced an earlier than expected due date for ‘Rosemary’s Baby’ mini-series. The updated 4-hour telling of the cult classic thriller is a two night event beginning Sunday, May 11th with the second half taking place days later on May 15th, 2014. The Mother’s Day “special” will air at 6 pm and stars Zoe Saldana, Patrick Adams, Jason Isaacs, and Carole Bouquet.

‘Rosemary’s Baby’ centers around a young newlywed couple who move into a Paris apartment.  While there, the wife learns that she is pregnant.  It isn’t long before the celebrations turn to horror as the wife suspects that there’s an evil plot in the works.