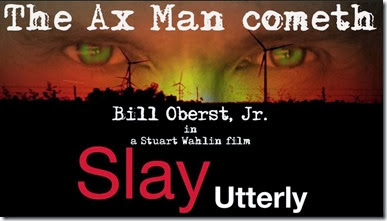 Check out the teaser trailer released for horror “Slay Utterly”. The film is based on true events revolving around the unsolved murders of the ‘Ax Man’ in Villisa Iowa in 1912. Almost 97 years ago, long before serial killers and mass murders had become a way of life, two adults and 6 children were found brutally murdered in their beds in the small mid-western town of Villisca, Iowa. During the weeks that followed, life in this small town changed drastically. Hit this link after you watch the trailer to read more about the tragic event.

“Slay Utterly” is directed by Stuart Walin and stars Bill Oberst Jr. It is currently in pre-production and is one of the most exciting new horror so far that I am eager to see. "Slay Utterly" is a modern adaptation inspired by the infamous 1912 ax murders in Villisca, Iowa. At the center of the story is an FBI agent who links the gruesome massacre to others throughout the nation's heartland. Faced with challenges resulting from poorly-controlled rural crime scenes, the agent struggles to stay on the bloody trail of the brutal "Ax Man," who spares no one in his path.