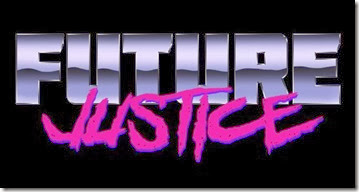 I just ran across the trailer for Scorpio Releasing’s “Future Justice” promoting the dystopian action thriller over on HellHorror.com and I think I like the cheesy, over-the-top camp of it all. Only time will tell when the film does release if I will enjoy the thing as much as I enjoy the trailer. “Future Justice” is directed by  Richard Griffin and stars  Nathaniel Sylva, Aaron Andrade, Steven O'Broin, Elyssa Baldassarri.

In the future Saturn’s moon of Titan houses a prison where Earth’s worst criminals are kept awaiting their return to Earth for trial and execution. One of those criminals, Python Diamond, is being flown back to Earth, escorted by five members of the military police. Upon their return to Earth, they find that a cataclysmic nuclear war has reduced the world to a near-lifeless husk.

Searching for survivors and any clue as to the cause of the destruction leads the six to a warehouse bunker housing scientists who constitute Earth’s last remaining hope for the future. Unfortunately, their landing spacecraft drew the attention of one of the gangs that roam the ruined countryside in search of food and resources, leading them straight to the carefully hidden and well-provisioned shelter. The gang lays siege to the warehouse, fighting their way inside in a bloody battle that takes lives on both sides.

Low on people and ammunition, Python and the remaining survivors wage a guerrilla battle against their attackers amid the twisting confines of the warehouse while, unbeknownst to both sides, a third party enters the fray, leaving carnage in its wake. This dangerous entity finally forces the remaining bandits and the few survivors to band together for mutual survival.