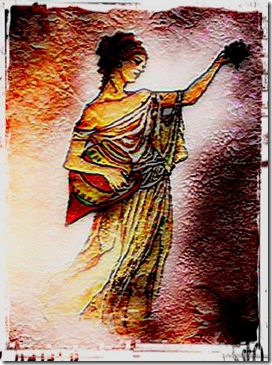 June 1st is the Festival Of Carna! She is Goddess of protection, and of health and well-being of humans, especially small children. She presided over the intestines, heart, and other human organs. Some scholars have described Carna as being a Goddess of good digestion. When parents appealed to Carna, this Goddess would enter the home and perform certain rites to bar a strix from entering the house. The strix was sort of a supernatual screech owl. If this evil creature could, it would fly in at night and eat a sleeping child's intestines so the child would not get good nourishment and waste away. Romans traditionally gathered with their family on this day, offering Carna beans and pork to thank her for continued good health. To symbolize this I am doing a small meal of ham and beans (probably add a rice dish in there too).

Eating this dish on this day was said to protect one's internal organs and bring health for the following year. The poet Ovid, though he confuses Her with the Goddess Cardea, says that the association of these simple foods with this Goddess proves Her great antiquity. These offerings were made in a sacred grove in which Carna was said to live, down by the Tiber river, and which was dedicated to the otherwise unknown God Alernus (or Helernus).Carna had a sanctuary on the Caelian Hill, the most south-eastern of the seven hills, traditionally vowed by L. Junius Brutus, the very first consul (whose surname means "Idiot", by the by) on the 1st of June at the very beginning of the Roman Republic, which is usually said to have been around 510 BCE. This sanctuary or temple may have stood for a good 700 years, as it is mentioned in the writings of Tertullian, a 3rd century Christian who was trained as a lawyer. However, he calls Her a Hinge-Goddess (that is, Cardea), so perhaps he had the wrong Goddess (and wrong shrine) too.

Carna is still confused with Cardea, the Goddess of Door-hinges, which is Ovid's fault; they are not related at all, merely having similar names. The story I've given under Cardea, where She protects a child from vampires with whitethorn, was told of Carna by Ovid; though he hopelessly mixes Them up, the Goddess in the tale does offer the vital organs of a pig as substitute for those of the child attacked by the vampire, so perhaps Carna was meant after all, as the vital organs are Her subject.
Posted by A Southern Horror Fan